The Good News About Regret 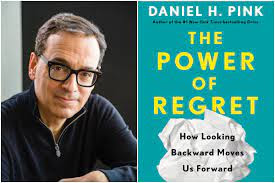 17 But when he came to his senses he said, ‘How many of my father’s hired hands have bread enough and to spare, but here I am dying of hunger! 18 I will get up and go to my father, and I will say to him, “Father, I have sinned against heaven and before you; 19 I am no longer worthy to be called your son; treat me like one of your hired hands.” ’ 20 So he set off and went to his father. But while he was still far off, his father saw him and was filled with compassion; he ran and put his arms around him and kissed him.

from the Parable of the Prodigal Son, Luke 15 NRSV

I'm reading a book called The Power of Regret: How Looking Backward Moves Us Forward by Daniel Pink and I'm here to tell you I don't regret it. Pink studies regret through the American Regret Project and through surveys and interviews has found that: "A whopping 82 percent of Americans report experiencing regret at least occasionally...Regret doesn’t make us weird. Regret makes us human. What’s more, if we handle it right — using failure resumes and other techniques — regret can also make us better."

Part One of the book is called Regret Reclaimed and the first chapter is The Life-Thwarting Nonsense of No Regrets. He tells the story of how Edith Piaf recorded what was perhaps her greatest hit: Non, rien de rien, Non, je ne regrette rien...No, nothing at all, No, I regret nothing at all. Yet Piaf died in her forties, likely because of her addictions, and did express what amounted to regret about a number of things in her last months.

Pink has interviewed several people who have tattoos declaring "no regrets", as well as celebrities such as Angelina Jolie and Bob Dylan who have a "no regrets" outlook. Still, few people he's spoken with say that they unequivocally live without regret. Pink maintains that while regret is one of the negative emotions it may be the most powerful and human of them all. It can be an essential aspect of self-understanding, psychological health, and a power for positive change.

Pink includes a chapter on Moral Regrets which intrigues me as someone whose profession included listening to a lot of people share what they felt were their shortcomings, often with an overwhelming senses of their moral failure. He has a subsection in that chapter called The Five Regretted Sins which are: deceit, infidelity, theft, betrayal, sacrilege. That sounds about right to me, thinking back on what I heard in the "confessional". I also have my own wheelbarrow load of regrets and while I try not to let them define me I don't want to deflect or deny them either.

As I muse about what I'm reading I realize how important it is for all of us to take responsibility for our actions, which will include regret. We may feel shame for what we have done but it isn't healthy to be consumed by shame, or regret for that matter. I can think of several lovely individuals who sadly could not let go of their regrets and lived with tremendous sadness.

Experiencing and expressing remorse, seeking forgiveness are essential for mature faith in most religions. For Christians the forgiveness offered through the love of the crucified and risen Christ are central. And this is Good News.

I can't do justice to this worthwhile exploration of regret in a few paragraphs but this may stir your interest.

Does repentance turn the negative feeling of regret into action, or a moving forward of some kind, or a commitment? Kathy B.

That's an excellent question Kathy. There is the tearful, TV preacher repentance which is really "damn, I got caught." I do think that genuine repentance and a commitment to restitution, when possible, does make a difference.