God in the Shadows During Alzheimer's Month 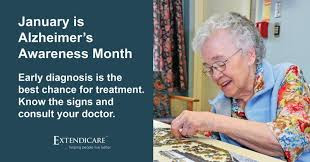 January is Alzheimer's Awareness Month in Canada, which is more accurately dementia awareness month in that Alzheimer's disease is the best known of a number of forms of cognitive impairment and decline. There are approximately half a million Canadians directly living with dementia, while millions more are affected because they are their loved ones and caregivers.

It's hard to imagine anyone who doesn't have a personal story about the effects of dementia on those they know. In my case there were many parishioners through the years who had dementia and I'm so old that we vaguely termed it senility when I began ministry. While Dr. Alois Alzheimer has been dead for more than a century the descriptive term Alzheimer's disease has become much more common in the past thirty years, it seems to me.

The reality of dementia came even closer to home when my late mother began her cognitive decline related to Parkinson's disease. The progression of Parkinson's was slow, as was her dementia, and it was hard to witness in this intelligent, resourceful, faithful person. She continued to be gracious to the end which, sadly, is not the case for many. As a pastor it was hard to see caring, decent people become angry and paranoid and even violent as a result of their disease.

I lead study groups on dementia in two congregations with the title God in the Shadows: Dementia and the Spiritual Life. We involved the Alzheimer's Society, as well as a palliative care doctor, and I interviewed family caregivers about their experience with loved ones. We explored scripture as a foundation for our approach for support. In one setting a participant asked about establishing a congregational support ministry. I found both these groups meaningful as stories were shared and they were among the best attended of any I offered through the years.

It's important to stay aware of the challenges of dementia in congregational life in these unsettled and isolating times. I've heard from people in ministry that the restrictions on gathering for worship, congregational activities, and in-person visits have affected many with cognitve issues.

As always we can pray, call, provide support in whatever ways possible. We do this in Christ's name and as our collective ministry of compassion and love.

It's so unsettling to see a loved one suffering from dementia. I constantly had to remind myself that this family member's actions and behaviours were being led by this disease, and I focused on all the wonderful times before the dementia.

I think your outlook is the one which brings the greatest solace Roger.