This Christian and the Ballot Box 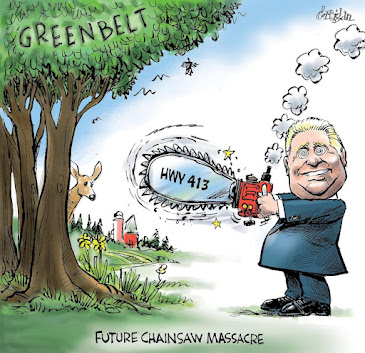 During nearly four decades in Christian congregational ministry I never publicly endorsed a political party or leader, and I was careful about how and when I dissed a few. Christian faith is political in the broader sense, requiring our engagement for the good of all. Still, I didn't feel that I was going to get anywhere by being sectarian from the pulpit. Of course there have been many clergy elected to public office through the years, including United Church ministers, and Tommy Douglas, the father of universal healthcare in Canada, was an ordained Baptist pastor.

All this said, one of my resolutions for 2022, the year of an election in Ontario, is to be outspoken about what I feel is the assault on the environment by the current Conservative government in the province. In a mere three and a half years Premier Ford and his minions have dismantled environmental protections, some of which he promised during the 2018 election campaign to leave alone (think Green Belt.) His government has defunded Conservation Authorities which since their inception in the 1940's have become a model for countries around the world which send representatives to study how our system works. Green projects have been cancelled, some at huge cost to taxpayers. When the Conservatives first came to power they actually removed electic vehicle charging stations in some locations and ended rebates for the purchase of electric vehicles. They conveniently omit mentioning these regressive choices during recent press conferences to announce new charging stations.

One of the more egregious decisions is the expenditure of what will probably be $10 billion to build two multi-lane highways through areas of southern Ontario which are currently productive farmland. Rather than spending this money on expanding reliable public transit, highway 413 and the Bradford bypass will encourage urban sprawl. Communities along the route have voiced their opposition, as have farmers. It's been pointed out that these two routes were shelved in the past because it was felt that they would provide limited benefit.

I am a Revgeezer now, retired for several years, so I don't have to be diplomatic about expressing my concerns and opposition. As a Christian who wants to "live with respect in Creation" (UCC New Creed) I care deeply about what is unfolding for the sake of my grandchildren and the integrity of a planet which is reaching the boiling point.

I'm still trying to figure out how I can voice my deep concerns other than on election day, but I'm a man on a mission.

When it comes to elections, a leader's action(or inaction) on the environment is one of the ways I decide who I vote for. It's so important. For crying out loud, do we need another congested highway in the GTA? Let's focus on public transport and make it the number one option for those who need to travel to the city for work or any other reason.

Agreed Roger. I was disappointed to see the federal Green Party self-destruct last year but I like Mike Schreiner of the Ontario Greens. Any of the parties has a better environmental platform than the Regressive Conservatives.