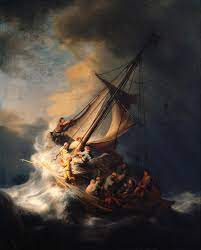 On that day, when evening had come, [Jesus] said to them, “Let us go across to the other side.”  And leaving the crowd behind, they took him with them in the boat, just as he was. Other boats were with him.  A great windstorm arose, and the waves beat into the boat, so that the boat was already being swamped.  But he was in the stern, asleep on the cushion; and they woke him up and said to him, “Teacher, do you not care that we are perishing?”  He woke up and rebuked the wind, and said to the sea, “Peace! Be still!”

In some respects old-fashioned TV channel surfing has become a curiosity of the past in this day of streaming services and binge-watching of highly touted series' and films. Somehow I came upon the first of three segments of a series on TVO called Looking for Rembrandt even though looking for the Dutch painter was furthest from my mind. I have been an admirer of Rembrandt Van Rijn since childhood because of a series of books my parents purchased on great painters in history. Rembrandt flourished in the early 17th century, making lots of money painting portraits and biblical scenes only to spend it like mad. He was famous and popular and he married the love of his life and had a child. Sadly, the child and then others died young, and so did his beloved Saskia.

I searched out episodes two and three online and they tell a rather dark tale of decline. Before he was forty Rembrandt seemed unable to produce enough work to keep his deserved reputation, perhaps crushed by grief, and he had trouble keeping ahead of his creditors.There was scandal and humiliation, and while he was also an exceptional printmaker that work didn't pay the bills in the same way as his early paintings.

When Rembrandt died in his early sixties he was virtually a pauper, having been forced to give up his home and auction off his possessions. He was buried in an unmarked grave.

Rembrandt painted numerous self-portraits through the decades beginning with a jaunty image from his early twenties to the weary old man near the end. It's been suggested that he originated the selfie!

Rembrandt had a religious upbringing and knew scripture. He painted many biblical subjects including some images which I didn't know. The dramatic depiction of the Storm on the Sea of Galilee is his only known seascape, and it was a revelation for me even though I've seen a number of his works, in person, and studied many others.This painting was stolen from the Gardner Museum in Boston in 1990 and never recovered. 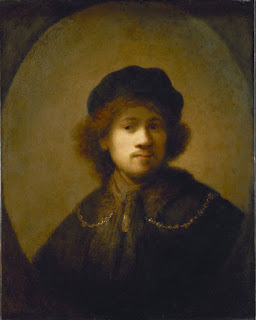 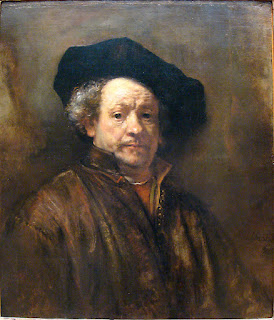 Many of us know one of his final works, The Return of the Prodigal Son, a huge piece which is in the Hermitage in Moscow. There is a book by the last theologian Henri Nouwen, also from the Netherlands, which reflects on this painting and the themes of homecoming. If I recall correctly,  Nouwen was on his way to see it when he died, suddenly.

Was coming across this documentary series providential? I found the episodes quite moving, so I'd like to think so. 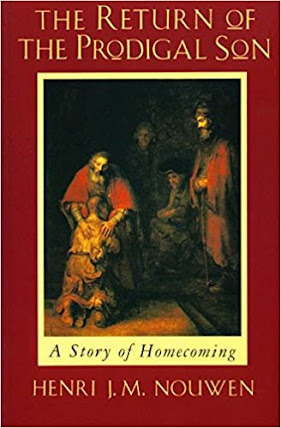 Yes we saw it too. TVO is a treasure trove.
The curators interviewed at the Gardner were clearly still heartbroken over the theft of "The
Storm on the Sea of Galilee" and no wonder. I love the composition element in this painting as well as the postures and expressions of the subjects -- and the shade and illumination heightening the drama. So all this was evident early in his career, a decade before "The Night Watch." KB

I'm glad you saw it, Kathy, and perhaps you were able to take in all the episodes. In some respects the first one was more satisfying because it charted the rise of his career but all were worthwhile. I agree with your reflections on the Sea of Galilee painting, and with your observation that TVO is a gem!

Yes, saw all three episodes. Wonderful production in every way. Struck by the Chamber of Insolvency with the frieze over the door with Icarus flying too close to the sun ---there's a lesson for all who entered, but probaby too late. Lack of money was certainly the bane of his existence. KB

Oh yes, I described that frieze to Ruth -- how chillingly graphic. I was also impressed by how stylish and perfectly coiffed all the presenters were. And the Last Supper gathering of experts around a table at one point was a great touch.

Yes I agree about the presenters. First of all, they were all so knowledgeable in their areas of expertise. And there was great care taken to have them in their own settings and to light those largely interior settings beautifully. The camera usually had the presenters facing forward; sometimes they were shot in profile which gave some nice visual variety.
The graphic illustrator was delightful, and his studio had a feeling all its own. I could go on, but I'll end it here and just give a shout-out to BBC and Matchlight! Thanks for your original post David. KB