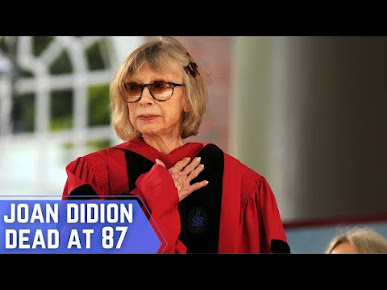 Nearly a decade ago one of my brothers-in-law died suddenly at his desk while at work. He'd just had a routine medical examination which declared him in good health for a guy in his later 50's and he was active. But his father had died young due to heart issues and seemingly heredity caught up with him.

Needless to say, my sister-in-law was stunned, as were their two teen children. His death made no sense and there was no actual goodbye, even though there was a meaningful farewell service with lots of people in attendance. As people of deep Christian faith the family affirmed their shared resurrection hope but he was gone, and where was the consolation? 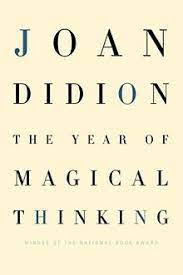 After a time I gave my sister-in-law a copy of Joan Didion's grief memoir, The Year of Magical Thinking. It is about this exceptional writer's experience of losing Dominic Dunne, her husband of many years, when he collapsed and died at the dinner table. They had been to see their adult daughter who was inexplicably gravely ill in hospital and in a coma. Didion introduces her book by saying:

This is my attempt to make sense of the period that followed, weeks and then months that cut loose any fixed idea I had ever had about death, about illness, about probability and luck, about good fortune and bad, about marriage and children and memory, about grief, about the ways in which people do and do not deal with the fact that life ends.

The title of The Year of Magical Thinking is a powerful statement in itself about the myriad ways life changes because of grief. She wrote that despite the kindness and company of others she wanted to be alone, so he would come back.

Joan Didion died of Parkinson's disease just before Christmas at the age of 87. I've yet to  rummage around and find my copy of the book but I will.

I wish I could express confidence that because of regular exposure to loss as a minister as well as  the deaths of parents and other family members that I am prepared for the losses yet to come. I don't think I am. I will continue to do my best to affirm that:

In life, in death, in life beyond death

God is with us. We are not alone. 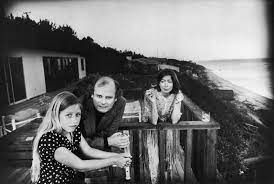 We all know that nobody gets out of this life alive , but we are never prepared to lose someone we love, and the following days, weeks, months, and maybe even years of mourning are not easy to go through. Faith in a God who loves us helps... a lot!

I've lost a number of good friends who were in their fifties, over the last few years. It's eerie when I think about it. It prompted me to read the book "Seven Lessons From Heaven" which was written by a surgeon in the US. She had experienced death briefly when she drowned while kayaking. The experiences she writes about in that brief afterlife is something I hold onto when grieving. It gives me hope, and that it truly is a "promotion to glory". But I still miss my parents and friends dearly.

Thanks, Judy and Roger, for your comments. I appreciate both of them.