The Legacy of Sidney Poitier 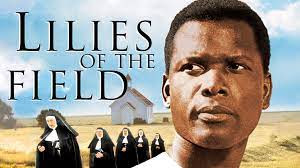 Consider the lilies how they grow: they toil not, they spin not; and yet I say unto you, that Solomon in all his glory was not arrayed like one of these.

Wow. Doesn't it seem as though that in recent days a number of the greats of an era in a variety of fields have been "promoted to glory," as they say in the Salvation Army? The good news is that they lived long and meaningful lives. The latest is Sidney Poitier, one of the finest actors of the 1960's, who died at the venerable age of 94. Poitier, a Bahamian American was also an activist, a friend of Martin Luther King Jr. who attended the March on Washington where MLK delivers the iconic "I Have a Dream" speech. 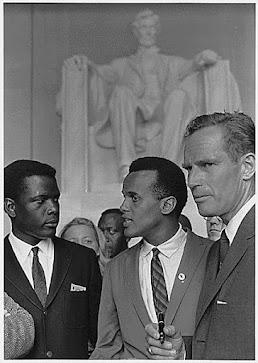 Poitier is often cited for his roles in To Sir with Love, In the Heat of the Night, and Guess Who’s Coming to Dinner. We watched A Raisin in the Sun last year, which was excellent,  as well as the lesser known Lilies of the Field, the only role in a picture for which he won a Best Actor Oscar. He played an itinerant handyman who first reluctantly, then with greater zeal, helps a small group of nuns build a chapel. He gives these German emigres English lessons and in one scene he teaches the sisters to sing the African American spiritual, Amen (his voice was actually dubbed).

Initially Poitier was lauded for breaking through the race barrier as a movie star, but he was also criticized for being overly accommodating of white culture in his roles. Race and racial prejudice is certainly addressed in a number of these films. We were impressed by his screen presence and the quiet, yet physical intensity he brought to the various roles.