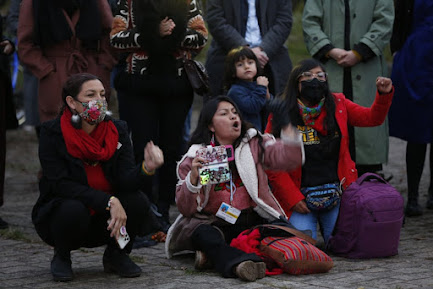 Activists hold a memorial at Cop26 for the 1,005 environmental defenders murdered since the Paris agreement. Photograph: Murdo MacLeod/The Guardian

Long before my people journeyed to this land your people were here, and you received from your Elders an understanding of creation and of the Mystery that surrounds us all that was deep, and rich, and to be treasured.

We did not hear you when you shared your vision. In our zeal to tell you of the good news of Jesus Christ we were closed to the value of your spirituality. We confused Western ways and culture with the depth and breadth and length and height of the gospel of Christ...

United Church of Canada Apology to Indigenous Peoples 1986 (continued below)

When the United Church of Canada made it's first apology to Indigenous peoples in 1986 a recognition of colonization was key to the message. Christian denominations around the world have been coming to grips with their roles in imposing European culture and values on Indigenous peoples, including the mindset of rampant resource exploitation which has contributed to the current climate crisis. It is only in the past few years that we are recognizing that Indigenous practices and spirituality honoured Creator and Creation and that the misrepresentation of the biblical message undermined caring for the Earth and put ecosystems at peril.

Currently thousands of national leaders and representatives from a multitude of organizations are in Glasgow, Scotland, for the climate summit known as COP26. So are members of Indigenous communities from around the the world who want to be heard as they challenge assumptions about how to address the climate emergency. Here are a couple of paragraphs from coverage by The Guardian yesterday:

As world leaders inside the Cop26 conference centre in Glasgow boasted about pledges to slash greenhouse gas emissions and end deforestation, indigenous delegates gathered across the river Clyde to commemorate activists killed for trying to protect the planet from corporate greed and government inaction.

At least 1,005 environmental and land rights defenders have been murdered since the Paris accords were signed six years ago, according to the international non-profit Global Witness. One in three of those killed were indigenous people.

The dead include Berta Cáceres, winner of the prestigious Goldman prize for environmental defenders, who was shot dead at her home in Honduras in March 2016 for opposing the construction of an internationally financed dam on a river considered sacred by her Lenca people.

Not only do nations need to address the issues of justice and safety for Indigenous land defenders, we can develop the humility which admits that we have made a mess of the environment with our mindset of plunder. Discovering how Indigenous spirituality cab be incorporated into our practices is essential.

We imposed our civilization as a condition of accepting the gospel. We tried to make you be like us and in so doing we helped to destroy the vision that made you what you were. As a result, you, and we, are poorer and the image of the Creator in us is twisted, blurred, and we are not what we are meant by God to be.

We ask you to forgive us and to walk together with us in the Spirit of Christ so that our peoples may be blessed and God’s creation healed.

from the United Church of Canada Apology to Indigenous Peoples 1986