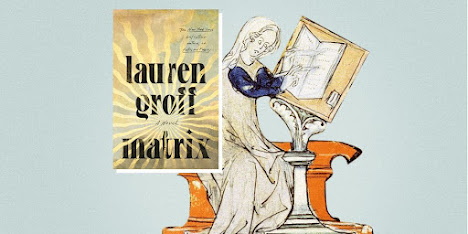 You probably remember the 1999 movie The Matrix, even if you didn't actually see it.because it was a big hit at the time This science fiction action film had Keanu Reeves and others flying around, fighting, and intoning quasi-mystical stuff.

I want to bring your attention to another Matrix, Lauren Groff's latest novel which has plenty of spiritual stuff in it because its about a convent from the past rather than the future. Groff is an exceptional writer and she weaves a feminist tale about 12th century nuns who become a force to be reckoned with under the leadership of an initially reluctant abbess who is forced into her role because she is the inconvenient daughter of nobility, the child of rape. When in doubt, send your problematic womenfolk to a nunnery.

While this young women, Marie, arrives without faith she grows into it, alongside her role, and even has mystical visions which guide the convent from poverty to prosperity. The summary in The Guardian is very good:

Matrix is a very free imagining of the life of Marie de France. Almost nothing is known about this pioneering poet except what she tells us, with a self-assertion unusual for her time and gender, in her collection of Breton lais, or romances, and translations of Aesop’s fables. She was probably writing in England, though she came from northern France. Her poetry gives no indication that she belonged to a religious house, though she has been tentatively identified with Mary, abbess of Shaftesbury. Groff seizes on the few hints, rides cantering into the huge gaps, and makes up a life for Marie – a long and full life as a visionary leader, queer lover, writer and mother, or “matrix”, to a thriving community of women.

In an interview with Groff she says that she went to a lecture by a medieval scholar and was so taken by the era that she put aside the novel she was working on to create this story. There are hints of Hilldegard of Bingen and Julian of Norwich and Teresa of Avila, all connected to convents through the centuries. Hildegard had remarkable visions which were recorded for posterity and she challenged male authority figures, as does Marie. There is even a labyrinth in Matrix, although what is described seems more like a maze.

Ruth and I both really enjoyed Matrix and I figure it would make an excellent book club read, whether from a religious standpoint or not. Oh yes, despite the shared emphasis on mysticism with the other Matrix, no one flies about in Groff's novel.