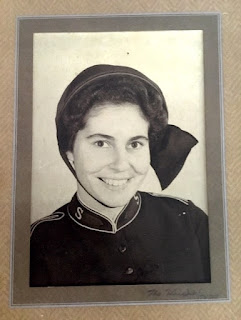 We'll soon make the drive to Trenton for Sunday morning worship, and during the service we'll acknowledge those "saints" from our family of faith who have died in the past year. This is a poignant morning for us because it is the third anniversary of the death of our mother, Margaret Mundy, at the ripe old age of 92 years, 10 months. Mom had been living with dementia for a while but still knew her two sons and we were at her side when she slipped from this life to the next.

Mom was a person of deep faith and resurrection hope so despite our loss we were grateful that she moved past the shadow world of dementia into the light of Christ. She grew up in the Salvation Army and served as an officer before leaving to become part of the United Church. While living in Toronto as a single woman she found her way back to a SA community with friends from her early years. In her obituary we described her death as "gently promoted to glory", a nod to that background.

Two of the  lectionary readings today are about valorous women of faith, a rarity in the lectionary. One passage is from the book of Ruth, the climate refugee,  an intimate story of loyalty, faith, and new beginnings. The gospel lesson is about an unnamed woman, a widow who is noticed and honoured by Jesus because she is generous despite her poverty. Both were vulnerable, perhaps considered inconsequential in their societies, yet still remembered. The gospel passage is a excellent story for our personal remembrance because Margaret was a very generous person to her family and the causes she supported even though she lived modestly.

My mother overcame a host of challenges including the sudden death of her mother when she was in her teens and starting over after divorce. As sons we admired her immensely and for us she was a model of the Christian life well lived. She was a saint in the best sense of that term and she will be in my heart and mind this morning.