Saving Forests, One Church at a Time 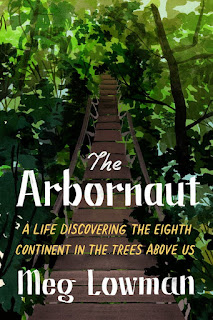 One of the more enjoyable and inspirational books I've read lately is Arbornaut, by acclaimed biologist Meg Lowman. It's the story of a very shy and not very athletic child who is nonetheless very inquisite and determined. She wins a science fair prize early on, much to her surprise, an achievement which seems to have been the slingshot for the next six decades of her life. The slingshot reference is my attempt at humour, as I'll explain.

Lowman studied forest biology at college, a discipline with virtually no woman in it. She excelled despite the misogyny and ended up in Scotland as a graduate student. This led to an opportunity to study rain forest canopies in Australia, a move which eventually resulted in working on every continent with trees in research, academia, and other projects. Lowman realized that the conventional ways of studying trees rarely included the "up close and personal" examination of the forest canopy. She felt that this was akin to a physician examining only the big toe of a human patient.

Lowman developed ways of getting into the canopy by literally using a slingshot to launch lines over the branches of trees, often 30 metres up. She adapted and invented climbing pulleys and harnesses to hoisting herself to dizzying heights. There she discovered what she describes as the "eighth continent" which is home to tens, perhaps hundreds of thousands of species not seen from the forest floor. Her methods of getting aloft have changed the study of forests around the world and have opened the way for women in her field. She became an arbornaut, a term adapted from astronaut (the exploration of space) and aquanaut (think of Jacques Cousteau beneath the ocean surface.)

Lowman has been able to study and act in unconventional ways, including her openness to seeing the connection between the scientific exploration of forests and the traditional sacred forests of religious groups on different continents. Chapter 10 is entitled Building Trust Between Priests and Arbornauts: Saving the Forests of Ethiopia, One Church at a Time. A number of years ago Lowman flew to this African nation to work with the priests of Ethiopian church forests, on the invitation of an exceptional ecologist, Alemayehu Wassie Eshtie, who had first studied to be priest and realized the spiritual and biological importance of these enclaves of biodiversity.  The forests surround the church buildings at their centre and the priests consider them as an essential part of their churches. They have attempted to protect them even as much of the rest of Ethiopia has been denuded of trees.

Meg writes about standing before a gathering of 150 white-clad male priests who spoke a different language, were likely dubious about a female presenter, and had been paid to attend. Despite the impediments the priests came on board and over time Lowman and Alemayehu have enlisted the help of biologists from different places in the world and locals who appreciate the sacred nature of the forests.

In the chapter Meg Lowman promises that "I will continue to pray with the priests, host workshops, and merit the trust of the clergy as we partner between science and religion." She really is a remarkable human being and I highly recommend her book, even if you skim some of the nerdy scientist bits.

Always looking for a good read. I like reading about trees and the natural world.

Delighted to hear from you Roger. I’ve been praying for the Steelers on your behalf but apparently the team is a low priority for God.

It can be a real challenge to be a Habs and Steelers fan. A good book can be a nice distraction!

Steelers and Canadiens...that's a level of divine intervention beyond my ken.