What Does Remembrance Mean Today? 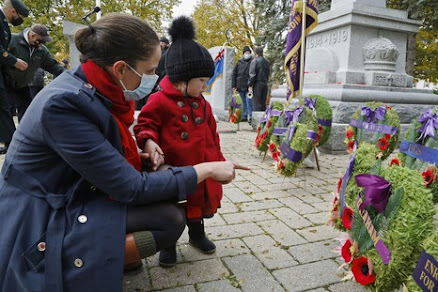 We cycled to the cenotaph this morning for the Remembrance Day ceremony, an opportunity we couldn't pass up given that some years November 11th is wintry. Last year we observed the eleventh hour of the eleventh month in Ottawa, albeit on TV. Why weren't we at the cenotaph? Ah yes, COVID.

Today there were several hundred people on hand, although not the numbers of gatherings before the pandemic. People were observing a reasonable distance and our national anthem was canned music rather than sung by participants.

I had mixed feelings this year, although the gratitude was there, as always. Both our fathers served during WW2 so when the old veterans salute I get a lump in my throat. There were prayers as well, and a scriptural reminder that there is no greater love than to lay down one's life for a friend.

I think that an opportunity was missed though in this year when flags which had been at half mast because of the discovery of the unmarked graves of Indigenous residential school children were raised prior to Remembrance Day, then lowered again this moring. I wish that this had been acknowledged in some way and that there was mention of Indigenous veterans. Apparently that did happen in nearby Trenton. Tyendinaga Mohawk Territory is nearby and while they had their own ceremony it would have been good to have a representative here to remind us of the 300+ members of the reserve who served during the two world wars.

This past Sunday morning our two Trenton grandkids told us that the following day, this Monday, was Indigenous Veterans Day, something I was probably aware of in the recesses of my mind but hadn't considered. They attend a French Roman Catholic school which is impressively inclusive in many ways.

Speaking of inclusivity, I was struck as well that it was two Christian pastors who took part this morning without recognition of other religious traditions. They fulfilled their duties with dignity but perhaps the day has come to widen the perspective in our pluralistic society. 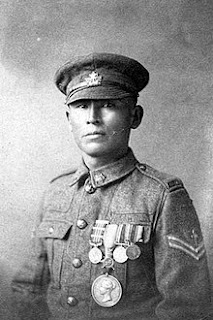 Francis Pegahmagabow was a Canadian First Nations soldier, politician and activist. He was the most highly decorated Indigenous soldier in Canadian military history and the most effective sniper of the First World War.