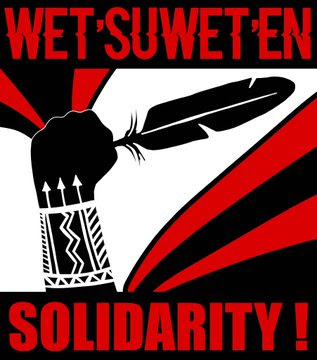 Two days ago a para-military force made up of RCMP officers and God knows who else invaded the Wet'suwet'en protest encampment in northern British Columbia. Even though these are non-violent Indigenous resisters who are convinced they are protecting their traditional territory from illegal encroachment to build a controversial gas pipeline they have been treated as criminals. More than a dozen of the protesters were arrested, including two journalists.

There are a lot of things which could be said here, but what strikes me is that while those of us from what is sometimes described as settler culture are often initially disturbed by the stories we hear about conflicts between Indigenous peoples and those in authority, our indignation and sense of injustice soon gets pushed into the background of our lives.

Remember the nation-wide concern over the treatment of Mikmaq fishers in Atlantic Canada? They continue to be in conflict with the DFO (Department of Fisheries and Oceans) who have seized gear. There was a widespread outrcy when the unmarked graves of Residential School children were discovered and governments publicly committed funding to do searches around those properties. But there is frustration on the part of a number of Indigenous communities that the money will be provided as reimbursement rather than proactively. There have been promises from the Roman Catholic church about financial compensation and a visit to Canada from Pope Francis to apologize for Residential Schools, but why has it taken public shaming to take action?

It's little wonder that many Indigenous people are skeptical about anything governments and churches say about healing and reconciliation and that the notion of being part of Canada has little appeal? Our United Church has made efforts toward apologies, compensation, and reconciilation, which is a start. Yet all this reminds us that this is just a beginning and so much more must happen.

I agree, David - I wish we could be sure that genuine caring intentions would take root at all levels of government, and among the settler population... unfortunately, greed will ultimately rule, and justice seems far away....